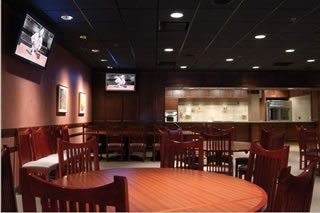 When Chicago’s College of DuPage – the nation’s largest junior college – set out to rebuild its culinary arts dining room, it wanted to create a “culinary theater” that would serve primarily as a hi-tech classroom. To meet the school’s objectives, the theater needed a professional quality video system that could record, play back, and archive cooking demonstrations for classroom instruction. The resulting Escoffier Culinary Theater is not only a major upgrade to the school’s food service education program, but it also helps attract students and the public to the campus.
Theater design

George Macht, the school’s hospitality program coordinator, says cooking shows on the Food Network, such as Emeril Live, served as the inspiration for the project. Once he knew what he wanted, Macht spent several months working out his ideas and brought in architect Bob Suennen of Evanston, Illinois-based OTA Partnership to design the space – a culinary theater featuring a 50-seat dining room. Lisle, Illinois-based Media Resources Inc. was later enlisted for the project’s AV equipment selection and installation.

“What we tried to do was to show people the behind-the-scenes stuff that you wouldn’t see on the Emeril show, because here you have an actual working kitchen,” says Brian Maksa, vice president of sales and rental at Media Resources.

Because the large kitchen needed to accommodate constant use, airborne grease became a major concern in selecting the appropriate AV equipment for the project. “You can’t be sure what’s going to happen in there, so we used a domed Panasonic WV-CS854A camera where everything is enclosed and sealed,” Maksa says. “If we have any issues, we can just pop off the dome and replace it.”

The camera offers pan, tilt and zoom with 360-degree rotation. “You might not think this type of camera would give us the quality we need, but you’d be surprised,” he adds. “The nice thing about it is that we’re able to set up presets on the control system to focus it on various workstations around the room, whether that’s salads, meat preparation or pastries.”

Maksa also mounted three Sony DXC-390 three-chip cameras on AMX Positrack camera controllers on a soffit above the service pantry adjoining the dining room, which is used for lectures and demonstrations as well as meal assembly and buffet service during public meals. For production use, the video system includes three computer inputs to accommodate instructors’ presentation needs as well as VHS and DVD recording and playback capability. One use in particular stands out. “The students each learn to create a signature meal,” says Macht. “Now the school will be able to record them and give the students a DVD they can take to prospective employers.”

“Because the college has a full-blown broadcast department, we set it up so they can bring handheld cameras in, genlock them and live switch them,” Maksa says. The theater’s AV rack also includes three preview monitors and a character generator. “They can’t do dissolves or fades, but they can put a TV director in the AV room and do a very professional production,” Maksa says.

To provide the college with automated control of the new system, Maksa installed a password-protected, 17-inch AMX Modero control panel and an Extron Crosspoint matrix switcher, which enables users to easily display four images simultaneously. “The large control panel makes the buttons easier to see and easier to understand,” he says. “It allows the department to have a very basic operator in there doing very sophisticated things.”
A future ready system

Media Resources also ensured that the AV system would allow the college to expand its capabilities in the future. The cameras and plasma displays installed in the theater help make the demonstrations visible to a large audience, and the video recording system enables the school to archive them for future use.

Macht says the college has more ideas for using the facility than it has time to implement. The school plans to eventually rent the facility to companies for demonstrating food product preparation to Chicago-area customers. “We even have the capability of broadcasting live on the Internet, either for distance learning or in conjunction with the rental program,” he says.

At the culinary theater’s grand opening in February, the college held a dinner that featured cooking demonstrations from guest chefs from chic Le Francais in Wheeling, Illinois and Opera in Chicago. Other special events have been a big success as well. Catherine Leveille, supervisor of the Foodservice Academic Lab, says the public response has been so strong that guests must buy tickets several months in advance.