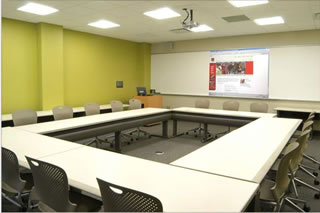 Any absent minded professor who puts the remote in his pocket and walks out of one of the library class rooms at Lake Forest College won’t get far with his forgotten memento. Just seconds after the AMX Modero 7500 touch panel leaves the room, an email message pops up on the computer of Academic Technologist Karen Blocker. “The wireless panel has gone off line.” A similar message speeds its way to Brian Maksa at Media Resources Inc., of Lisle, IL, and before long, one of the two has tracked down the errant professor and retrieved the touchpad.

That quick response is all part of the security features that surround the AV systems installed in the four “smart rooms” by MRI. They’re part of an $18 million expansion and renovation of the Lake Forest College library in Lake Forest, Illinois. “I had a vision that I wanted to take these rooms to the highest level I could,” said Blocker, who manages the college’s classroom and media services. “This is the first time I decided to go with a switching device on a wall unit.” That decision followed the disappearance of any number of handheld remotes from the college’s older classrooms, where the technology is stored in an open rack unit. When Maksa offered her the wireless convenience, easy interface and tighter security features of the Modero Touch Panel, the choice seemed obvious.

“It’s pretty slick,” said Blocker. “It can power up the projector and CPU at the same time. You can take it off the wall, sit in the back of the room, open up your PowerPoint and advance your slides right from the remote.”

In fact, you can do anything from the touch panel that you can do from the PC. “They can take over control of the computer, type in data or bring up the Internet” said Maksa. “It’s like having the computer monitor in their hands.” From the Modero touch panel a professor can also control the combo DVD/VCR, the switcher, even the volume. They can change channels from Direct TV or monitor the projector hours, all from anywhere in the room. “Some professors like to speak from the podium at the front of the room and have everyone’s attention,” said Maksa. “Others like to be in the back of the room controlling their presentation up front. They’re probably making sure everyone’s paying attention and no one’s falling asleep!”

Maksa designed identical systems for the four smart rooms. Each is equipped with a ceiling hung Sanyo PLC-XU55A projector, an Extron DVS 406 scaler/switcher, an Extron P2DA2xi digital amplifier, two JBL Control 25 speakers wall mounted on either side of a large whiteboard, the Modero panel and a Marshall custom podium with built in PC, Sony SLV-D550P combination DVD/VCR and a Sony STR-DE197 stereo receiver.

Aware of the school’s security concerns, Maksa programmed the Modero so that Blocker can set up personal passwords for people who want to remove the touch panel from the wall. She then knows who has taken the touch panel off the wall should someone inadvertently walk out with the remote, triggering the emergency email. They might also forget to put the panel back on the wall causing it to lose battery power. MRI also took care of that scenario.

“We created a web control form on the PC,” said Maksa. “If for any reason they can’t use the panel, each of the desktop computers has the ability to bring up the panel interface on their monitor, so they just click the controls with their mouse.” In fact, some professors prefer to use the mouse and monitor rather than the touch panel. “When you’re at a college everyone likes to do things their own way, so simplicity is key.”

Although LFC knew what they wanted, they left the system design to MRI. “My whole concept of the room was to make it as simple as possible,” said Maksa.

MRI chose a Sanyo 2000 lumen projector and brought all of the video outputs through the switcher/scaler. “My thought was, make it simple, one input on the projector, because otherwise people tend to want to stand on the seats in classrooms and change the inputs on the projectors. But a projector has a 30 second warming period and when it doesn’t come on right away they start hitting all the buttons.”

This way, operation is cleaner and, because MRI scaled everything up to the projector’s resolution, the image is much better, too. With classroom lights on motion sensors and a whiteboard as the screen, the 2000 lumen projector still manages to provide an impressive image.

Blocker wanted MRI to do the design/install because she worked with them on nine earlier campus projects. “With other companies I was dealing with the salesman, who had no idea how to answer my electronic questions and the programming behind it. They had to contact their programmers and get back to me. Brian had a better vision because he was an installer before he was in sales.” He’s also quick to respond to her questions or problems and with so many different people using the systems in the four smart classrooms, maintenance is important.

“We go out twice a year to check out each room and report lamp life left on the projectors,” said Maksa. “Once you get up to a thousand hours, the quality of the picture starts dropping. We arrange to clean the filters twice a year because we know customers aren’t cleaning them and in the older buildings they collect more dust. Where there’s no air conditioning, it’s harder on the projectors.”

Recent years have seen a marriage of IT and AV that has blurred the lines in college classrooms. For Maksa and MRI, the two are a perfect fit. “The way I see it we’re there to help the students learn more easily,” said Maksa. “What AV does is create that environment. IT integrates with AV, but AV is the actual presentation process that people see and can use to bring it all together.”

“This is the vision of the future,” said Blocker, who should not have to worry about the touch panel’s whereabouts now that the hidden watchdog is programmed in to her system. Technology that’s as easy to use as it is efficient is no longer a remote possibility.