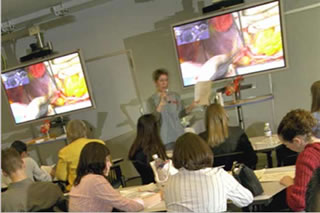 Have you ever wished you could see what goes on inside an operating room?

You can, at least if you’re a student participating in the Museum of Science and Industry’s Live… from the Heart program.

According to Elory Rozner, K-12 and E-Learning Manager for the Chicago-based museum, the program provides a “very dramatic and very moving” look into an operating room where open-heart surgery is taking place. Connected via videoconferencing equipment, students can watch a coronary bypass procedure live and ask questions of surgeons and nurses as they work.

Rozner says that the museum’s goals for the program were threefold. “First, we wanted to create an educational program about cardiovascular health,” she notes, which would teach the purpose and mechanics of the heart. The museum is famous for its human body exhibits, including a scale model of the heart that visitors can walk through. Rozner’s team put together a program for students in grades 6 through 12. It starts with a teacher workshop at the museum, continues with six lesson plans to be taught in participating schools, and culminates with a field trip to the museum’s new e-suite classroom where students participate in the surgical videoconference.

The second goal was outreach. “Since this is a videoconferencing program,” says Rozner, “we can take the program and send it out to southern Illinois, Wisconsin, Michigan, Texas, anywhere there are people who might never come to the museum.” Three classes normally participate in the weekly surgical session: one at the museum and two at more distant sites.

The third goal was career exploration. While students are watching the operation, they can talk to the surgeon, the physician assistant and circulating nurse. “They can learn about the educational background and the training of all of these people and how they work together in the operating room,” says Rozner. “They learn that it’s not just the surgeon who is the star of the show and that being a surgeon is not the only way to be involved in the health sciences.”

Making this program possible from a production standpoint was the job of Brian Maksa and his team from Media Resources. They designed a video system that could be operated by just one technician and broken down and stored safely when not being used for the weekly broadcasts.

They began by permanently mounting three Sony three-chip cameras in the operating room, each with an AMX pan-tilt control. One is on the wall, allowing a wide view of the room or close-ups of medical staff, who provide a running commentary on the procedures. A second is mounted above the operating table to provide views of the patient’s chest and heart, and a third is mounted above the patient’s feet, to shoot the surgeon harvesting veins for these bypass operations.

The team mounted one 20″ monitor and two wall speakers in the OR so doctors and nurses can see what they are transmitting and hear students at the far end. They also mounted two shotgun mics to pick up ambient sound and provided two wireless lavalier mics for the staff who speak to the students. The signals from all of these devices run to a patch bay located just outside the operating room.

Maksa says the real challenge was in the design of the production console that mixes the audio and video. “The problem we had,” he explains, “was that the system could not be placed in a permanent location. We had to build a console that could be wheeled down the hallway for storage between sessions and that could be set up and broken down quickly. Normally for this kind of production you’d spend an hour or more to let your cameras come to operating temperature and to have your engineer balance everything with a waveform monitor, vector scope and so on. But they do not have a broadcast engineer and they do not have the time for that kind of set up.”

Maksa’s solution was to base the system on a Panasonic WJ-MX50 audio/video mixer rather than more traditional components. “All they have to do is plug in to the patch panel, and the MX-50 automatically does the timing and adjusting for them.” The system gives the operator joystick controls for each of the cameras and a nice array of transitions and special effects. The finished video goes out to the museum via a Tandberg codec and can be recorded for future reference.

The new system has worked smoothly for the Live…from the Heart sessions plus some additional educational conferences. According to Al Drachenberg, supervisor of media services for the hospital, its first use came in November, 2002. “The hospital was a test site for a new endoscopic mitral valve heart surgery,” Drachenberg says. In fact the video system is set up to show images from the device, allowing viewers to see the inside of a patients’ arteries and heart. “When the procedure was approved, we ran a cardiac symposium and filled our auditorium with high-level physicians who wanted to learn about it. We had just installed the cameras and so we were able to send a video feed to the auditorium where everyone could watch. It was a little nerve racking to do our first video with this kind of an audience, but everything worked really well.”

The Museum of Science and Industry and the hospital have been very pleased with the Live…from the Heart sessions. If you’d like to learn more about the program, you can visit its website, livefromtheheart.org. But unless you’re a sixth through 12th grade student or teacher, you probably won’t be able to see it in action.

Elory Rozner explains why Live…from the Heart is not open to the general public. “The program is very dramatic and very moving, but we don’t want people coming in unprepared. Part of our concern is to show respect for the patients and for the process that the surgical team is going through. But mainly we need to be sure this is something educational, not sensational. It’s a 2 ½ hour operation, meant to be a comprehensive learning experience for students.”

*Note: Media Resources installed the AV systems at Advocate Christ Medical Center only. The e-suite classroom at the Museum of Science and Industry was designed by Shen Milsom & Wilke, Inc., Chicago and installed by another dealer.