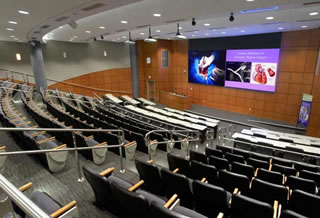 Since Advocate Christ Medical Center in Oak Lawn, Illinois, began videoconferencing live heart surgery from its ORs, countless physicians, nurses, students and medical personnel of all kinds have watched these delicate procedures come to life. Initially, the hospital connected exclusively to the Museum of Science and Industry in Chicago, through its program “Live… from the Heart.” The OR signal would be sent via T1 line directly to the museum, where an invited audience would view the real time surgery, as would designated high school students across the country.

With the opening in 2007 of a new conference center and adult surgical heart unit, Advocate Christ Medical Center has greatly increased its audience and its influence. A sophisticated $450,000 video distribution system now links four operating rooms, a 245 seat auditorium, nine breakout meeting rooms, two open air lobbies and a dining area. A Tandberg 6000 videoconferencing codec capable of 720i HD images ties the auditorium to the ORs, providing incredibly clear images of this sensitive surgery. “Nobody has anything like this,” says hospital AV director Alan Drachenberg, “I have physicians coming in here and asking, ‘What do you have?’ and I say, ‘What do you need?’ This is unbelievable.”

Wendy Ellis is a freelance writer with extensive experience in the AV and broadcast industries. She can be reached at www.kreski.com/contact.html