When Safety and Quality Are Truly Number One. 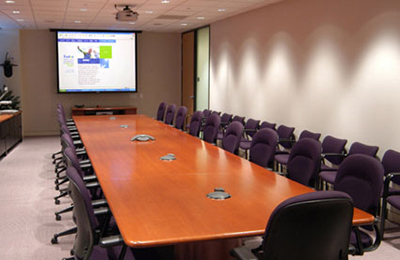 “They simply do not tolerate accidents in the nuclear industry. I’m starting to understand what that really means.” That’s how MRI’s Brian Maksa describes the safety standards at Exelon Corporation’s new headquarters, where he and his crew did an extensive series of A/V0 installations.

Exelon, the parent company of Commonwealth Edison and PECO Energy, runs 17 nuclear reactors at 10 stations in Illinois, Pennsylvania and New Jersey. “Everything must meet what they call industry standards,” says Maksa, “and those standards are beyond anything I’ve ever seen anywhere. You can’t push a cart without gloves on. You can’t climb a ladder without people there for fall safety. They want to be a top performer, and that includes everybody that comes in as a contractor.”

The result of this care is that nine out of the ten Exelon plants went through all of 2002 without a single lost-time or restricted-duty injury. Employees at the firm’s Braidwood Generating Station in Illinois have logged more than four million work hours without a lost-time accident. At Byron, it’s more than five million, a run that began in October 1999 and continues today.

These exacting standards apply to quality as well as safety. They’re one reason the company brought Media Resources into the headquarters project back in 1999, a year before construction began. According to Facilities Manager Kathy Namors, “Brian had done work for us before, and so we wanted to have him involved from the beginning. You want to make sure you have your specifications down cold. It’s expensive to be tearing up ceilings or cutting into walls to install items you thought about only after the building was built.”

At the heart of the new building is the Emergency Operations Facility, or EOF. The purpose of this area is to direct emergency efforts should an accident ever occur at one of Exelon’s Midwest nuclear power stations. Exelon also uses the EOF in monthly emergency drills with its stations, and it’s part of the biennial evaluation that the Nuclear Regulatory Commission runs on each plant’s emergency preparedness.

According to Ron Yungk, Midwest Regional Nuclear Duty Officer, one of the company’s goals has been to keep all of its plants in the industry’s top 25% for operating safety, as measured by the Institute of Nuclear Power Operations, an independent organization. Yungk says that Exelon has had some form of emergency operations facility for at least 25 years, but this new EOF was designed only with the extensive input of each of its Corporate Emergency Directors.

The facility consists of a central room with seating for nine engineers and managers, surrounded by a much larger space for support personnel. Media Resources installed eight 42″ plasma monitors to display data and video in the central area, plus four 37″ data monitors in the support area. They also installed a Gentner audio-conferencing system, satellite phones, an operator’s station and a seven-unit video recording rack for monitoring news media. In addition, the EOF is equipped for computer, telephone and radio communications, and audio from the EOF can be piped to the operations center and nine additional locations in the building.

Maksa says the sensitive nature of the room led to a few unusual requirements. “We couldn’t use any wireless mics in this room, because they didn’t want to take a chance on audio going outside of the areas it belongs. The mic on the table, as old as it looks, is there because it’s push to talk. If they have something they want to say to someone outside, then they press it. If not, then it’s released and they know the information stays within the room. They asked us to install a satellite phone system here and in each of the plants. We’re routing normal telephone, satellite and radio into the handset in the central EOF. If there is an emergency, then they have three independent and redundant types of communication that they can use to reach their people.

One reason the firm has such a strong safety record is the extensive monitoring they do for each of their power stations. According to Ron Yungk, “we monitor the generation processes of the plants, where the HGH HGH plants are at any particular time, what they’re doing, what their load profiles are, and essentially the day by day operations of each.” Part of the issue is production: Exelon has a certain demand they must meet each day, and operations decides which plants will run at what percentage of capacity to produce so many megawatts of power. They even have to monitor the weather. Since the EPA puts maximum temperatures on each of Exelon’s cooling lakes, operations must consider local temperatures and rainfall as they determine how much power (and excess heat) a given plant can produce.

Large screen displays are important in the Operations Center. Media Resources installed multiple plasma and CRT monitors plus switching gear in the Operations Center and two executive offices. “Most of the data we have is computer generated,” says Yungk, “but the plasmas give us a better way to display the information. Small monitors get kind of cumbersome when you have 40 people in the room.”

Readings from the plants can be switched into two department conference rooms, but these rooms are used mainly for meetings, including frequent videoconferences with other facilities. “We’re able to run about five meetings a week between the east coast and here,” says Kathy Namors, “without the need to travel.”

With so much emphasis on safety and procedures, training is obviously important at Exelon, and the new headquarters includes a large training center.
The center has a dedicated computer lab and two additional meeting rooms, one of which is dividable. “We train managerial, engineering, and office staff here,” says Namors. “They learn anything from Microsoft Office to proprietary software and operating standards.”

Planning for the new headquarters began in earnest in 1999, with Maksa and engineer Dan Meyer attending early project meetings. The builders broke ground in June of 2000, with occupation about one year later.

Namors says Exelon was able to utilize a lot of equipment from their old facility to keep costs in line. “Brian worked hand in hand with us,” she says, “to make sure that we reused what we could. And he gave us a lot of insight into the kinds of systems that would work best for us. Having him in on the ground floor of the construction was very advantageous.”

Maksa says the biggest challenge was making sure the other trades met his requirements. “In a project this size,” he says, “it’s easy for something to get overlooked. The architect didn’t really understand the a/v, nor did the electricians. So they might specify a conduit run too small for the cables we would need or position a screen where light from the windows would wash it out. Exelon doesn’t have an a/v director as such, so as the project went on, we began to take on that role for them, attending each of the contractors’ meetings and just making sure that everything was going the way it should.”

And Maksa says he gained as much as he gave. “I’ve been telling my guys that they have to stick to the nuclear standards on every job. Yes, it’s a little more time consuming, but you can’t sacrifice safety trying to come out a minute or two ahead. You may gain on one job, but long term you’re going to lose every time. The system seems extreme the first time you experience it, but it really is something everyone should do.”